Seeking a Lithuanian Church in Adelaide


In 1960 Lithuanian Catholics signed a petition in the attempt to establish a Lithuanian language Catholic Church.  Here is the petition;

To His Excellency, the Most Reverend Apostolic Delegate to Australia, New Zealand and Oceania

Four thousand years ago the Holy Family fled to Egypt in order to avoid persecutions.  Almost twenty years ago many thousands sons and daughters of our small nation withdrew to the West seeking rescue and refuge from the Antichrist slavery of red Mascovian Herodes and were dispersed throughout the continent of our planet.  A part of those who remained in their homeland is scattered in the slave labour camps of Siberia.
A written prayer book in the hand of Lithuanian girls has now reached the Free World coming from one of these Siberian slave camps.  In the Evening Prayers thanking God for the favours He has bestowed on them this day they also expressed their gratitude to Him for being given the change to pray in their native language.  This natural sentiment is with every one of us wherever we should happen to be irrespective of the country in which we are living, and in spite of all social and political conditions we happen to find.
And yet the main motive of this petition is not sentiment.  We Lithuanians who happen to have come to Australia are not entirely voluntary migrants.  Every one of us has the ardent wish to attain salvation of his soul.  We are concerned about the faring of our brethren with whom we share the same fate; we are worried about our families.  Our way of life is deeply rooted in the The Roman Catholic traditions of our nation which are to be traced back over more than five hundred years; they permeate not only our daily life, but our Church activities as well.  As it is our sincere wish to participate accordingly in this country’s life of the Roman Catholic Church, we humbly ask for permission to establish here our Lithuanian Personal Roman Catholic Parish.

At a time when our religion and nation are being destroyed by the scourge of anti religious Communism, we cannot look on calmly how our brethren are declining in their religion here in this free Australia of ours were Catholics are in the minority and where the anti-Catholic environment is creating many dangers to the religion and the moral even of grown up people.  The influence of that environment is felt even more amongst the youth we have lost a part of it for Church already.  It is our deepest conviction that only by the activities of a Personal Roman Catholic Parish for Lithuanians an approach to the young generations will be found, and only thus will they be won again for the Church alike the lost drachma of the woman in the Gospel.

In our attempts to establish the reasons of religious indifference and in anxious anticipation of the future we do compare our own Catholic way of life with that of our emigrants and refuges in other countries, especially the USA.  In the United States of America, Lithuanians constitute an imposing group in the Roman Catholic Church of that Country with several thousand vocations for priesthood, their own Catholic schools, hospitals, old age homes and even monasteries.

None of these were to be found in Canada and throughout the whole of South America before 1949, although impressive numbers of Lithuanians are living in these countries, except Sao Paulo where Lithuanians have their parish with two priests and nuns, also Lithuanians, of the Order of St Francis.  We humbly take the liberty here of drawing Your attention to the fact that from this place, and from here only – throughout the entire Spanish America – there are tens of vocations.

If the vast majority of the Lithuanians in the USA remained faithful members of our Roman Catholic Church, and if in the other countries mentioned above only a small part of our old immigrants remained with the Catholic Church, then the answer is to be sought not in numbers, but in the fact that in the USA, Lithuanians have their own parishes for at least 60 years already, and that such do not exist in other countries.  With these facts in mind the Lithuanian refugees in Canada have sought and have been granted the opportunity of establishing personal parishes during the last decade.
Being deeply concerned with the growing religious indifference amongst Lithuanians in Australia who missing Lithuanian traditions in the local churches, and not having the opportunity to hear their own language, begin to withdraw from the Church; and missing the active participation of our United States Lithuanian brethren in the mission initiated by Christ and attending to the Christian duties enjoined on us by God of seeing our children’s and our own salvation, we honestly think that only in Lithuanians, our own, Roman Catholic Parish we shall see religious revival become reality.

The present humble petitioners, the Roman Catholic Lithuanians of Adelaide, South Australia, we, neither do ask for financial assistance, nor do we raise claims on churches built by others.  We have enough land for a church and we are in the position of carrying out the erection.  We have a spacious house for temporary chapel and the priest to live – and ample accommodation at the disposal of the future parish.

There are about 1500 Lithuanians in Adelaide now.  500 of them, mostly representing the families, have signed this present petition for the Personal Parish.  Others will join as soon as the practical work of establishing the Parish will commence, when this humble petition of ours will be granted.  Without our own Parish we shall perish for the Church, and this will be not entirely our fault.

We do believe deeply and sincerely that this humble petition of ours will be considered and understood and blessed by You, by the Apostolic See and by God.  Here also we express our spiritual loyalty and allegiance to the Holy See.

On behalf of all petitioners;

Copies of this petition are sent to;
1. His Eminence Cardinal Marcello MIMMI, Secretary of Sacred Consistorial Congregation.  N.B with the list of 500 petitioners
2. His Eminence Cardinal Gregory Peter XV AGAGIANIAN, ProPrefect of Sacred Congregation for the Propagation of the Faith
3. To the Apostolic Delegate in Sydney
4. To the Archbishop of Adelaide

Following is 480 Names, addresses and signatures
at August 29, 2012 No comments:

In 1975 the Adelaide University radio station 5UV invited ethnic groups to present programs. You were able to listen to Dutch, German and Latvian.  Vytautas Neverauskas, President of the community at that time thought it would be wonderful to hear the Lithuanian language on radio.  He approached  Viktoras Baltutis, Secretary of the community to contact the radio station where he was promised a weekly half hour slot.  A committee was formed consisting of Algis Grigonis (technician), Jurgis Jonavicius, Jonas Neverauskas, Genovaitė Vasiliauskienė and Viktoras Baltutis. Algis Grigonis worked at the ABC as a radio technician, whose assistance was vital to the success of the program.

On March 13, 1977 the first progam was produced.  The community still had no equipment and at first used the studio at the Ukrainian house.  Algis contacted the Australian Lithuanian Federal Council for finance to purchase equipment.  $2000 was required, more than the committee had, so finances from Lithuanian Freedom society was borrowed.  The Adelaide Community converted the small room behind the stage at Lithuanian house into a studio.  It wasn’t hard to fill in half an hour as many of the community groups were keen to be participate.  It didn’t take long to repay the loan.

In 1979, the Adelaide Ethnic Broadcasters Incorporated (EBI) was formed out of the Adelaide University 5UV station and  given their own frequency.   It started to broadcast ethnic programs firstly in Dutch and Italian.  All previous foreign language broadcasts had been on commercial stations.  The Adelaide Lithuanian Radio committee approached EBI to extend their broadcasting time to one hour slot each fortnight, which they were granted.

The community still broadcast the one hour program, weekly on Saturdays at 9:00am on 5EBI 103.1FM. 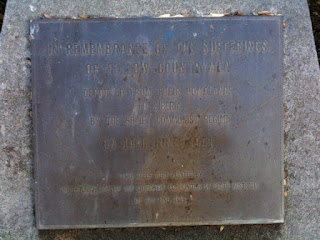 For many years the Baltic community has gathered to commemorate the June 13 & 14 deportations, in the Migration Museum courtyard.

In 1959 Juozas Lapšys, Baltic Council president organised for a memorial to be erected in the Glenunga Reserve, Connyngham street, Glenunga.  That year members from the Latvian, Estonian and Lithuanian communities  planted three trees and erected the above plaque in a granite rock.

As the years passed their was concern that the plaque would be lost, stolen or forgotten, so the Migration Museum was approached to see if they would take ownership.

Janina Vabolienė, President of the Lithuanian Community said in 2003 regarding the June deportations;
‘When our parents, brothers and sisters journeyed to distant Siberia, the echo of the train wheels  resound in our ears and our hearts reiterate  our countrymen’s torment’.
at August 20, 2012 No comments: 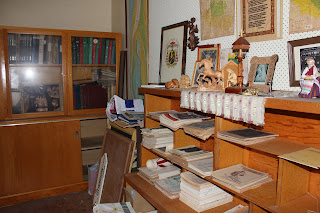 I call it the lost archives, it wasn't really lost, just neglected.  I am referring to the St Casmir Church Archives, located in the Lithuanian Catholic Centre at St Peter's.  I can remember going in their once probably 30 years ago, I remember it as small, dark and had lots of stuff.

In a locked room off the presently used Lithuanian school this room sits, it has had very little activity for many years.  As I have been speaking to community members about the Archives I have been surprised that many have not known it existed, this includes people who were active in the church.

As work has begun in earnest on the Australian Lithuanian Archives it was suggested that this Archive be merged with the others.  With great honour and excitement the keys were transferred to me with open access.  I certainly wasn't disappointed with the rich history and records that have been preserved.

The Archives contains records that relate to the Adelaide Lithuanian Centre, this includes; 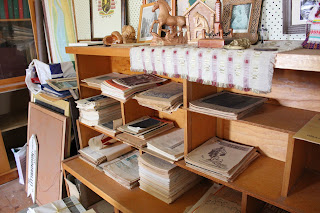 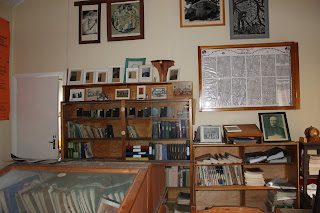 
In February 1970 a concert was performed by tenor Stasys Baras at the Adelaide Festival of Arts.  The Lithuanian community invited Mr Baras to Adelaide.  He was described as “one of the leading voices in the world of today.  In 1958, he was selected as the best male singer in the United States at the Chicago Music Festival”.

He sang lead roles in famous operas such as Faust, Tosca, Carmen, Il Travatore, Aida, Pagliacci, Fidelio, Grazina, Dana with the Lithuanian Opera company in Chicago.  His first record of operatic areas was released in 1966.


For the concert in Adelaide, Mr Baras sang with now Adelaidian, Genovaitė Vasiliauskienė.  She was described as one of the leading sopranos among Lithuanian singers. After finishing the Conservatorium singing classes in Kaunas she studied singing in Germany and in Australia.  For more than 10 years she sang with the ABC radio in Adelaide.  Twice she participated as a soloist in the Adelaide Arts festival.  As a soloist she toured all capital cities in Australia and in the USA and Canada in 1964.  Her first record was recorded in 1969 with the Adelaide Symphony orchestra.


The two part concert began with Stasys singing three arias from Donaudy, Handel and Giordano.  This was followed by Vasiliauskienė singing four songs.  Stasys followed this with several Lithuanian folk songs. The second half began with a duet from Bizet, followed by three songs sung by Baras.  Vasiliauskienė sang several pieces form operas and the concert ended with Baras singing from Carmen and Halevy.

They were again accompanied on piano by Shirley Hicks.


They gave a recital of songs and operatic arias, from Verdi, Bizet.  A concert was also performed at the Adelaide Lithuanian House on 18th March 1972.  Here they sang a number of songs written by Lithuanians, such as Šimkus, Banaitis, Jakubėnas and Gaidelis.

Lithuanian DP Doll makes a trip around the world

I received notification that a handmade Lithuanian doll made in DP camp in Dillingen Germany would be coming to the Archives.  The doll was ... 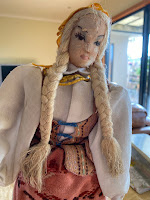